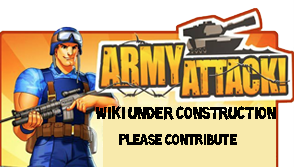 Land can be conquered by moving your units over the unclaimed area (which will appear as 'brown'). Once conquered, the 'brown' land will turn into a color of green. Certain tiles of land have Minefields, Barricades, Bunkers or Guard Shacks over them, which must first be destroyed before conquering the tile. The more land a player aquires, the player will have the upper hand. Land is needed to climb ranks, to build buildings (boot camps, factories, arsenal, HQ), to place defensive structures to block the enemy, and also to drive the Crimson Empire out of the player's 'land.'

Minefields are easily destroyed, however can slow your progress in conquering if it is placed in huge amounts. Due to minefields having one health, they can be destroyed with any of your units in a single strike. Use artilleries to help destroy them. Since artilleries have long range, they can stay in one position and repeatedley wipe out minefields using less energy (whereas using infantry to move right next to each minefield to take them out takes huge amounts of energy).

Bunkers are hard to destroy and they cause some damage. Bunkers can be taken out by units with more health- APCs are a good unit to take out bunkers. It is recommended to strike with multiple units.

Guard Shacks are also similar to bunkers, except that they have less health but have more range. It will be pesky to destroy, as it is hard to approach to strike. Expect some moderate damage to your units. (Note that guard shacks do not appear until the player unlocks the 4th map.)

Units are purchased in the shop menu under "units" as apposed to being manually built/trained in buildings.

Note:If a non-elite unit is defeated, you must heal it within 28 days (4 weeks) or it will cease to exist.

Retrieved from "https://armyattack.fandom.com/wiki/Army_Attack_Wiki?oldid=7177"
Community content is available under CC-BY-SA unless otherwise noted.